Check out the new plane in our fleet. I just received my full aerobatic rating last season so I can’t wait to put this baby on her back 😉

It is still winter and I seriously need to get airborne! My LS6 is sitting snowed in at our field right now, but I sure I can feel the sun against my skin…..scanning for some cumulus – nope – not yet. So what do we do to keep our nerves at hold during the dark and cold months? We spend hours and hours on youtube scanning for new and inspiring clips. Not to mention the fantastic soaring simulator Condor! I simply do not think I could survive the winter months without it! Thanks to all of my fellow pilots who organize and participate in the fantastic condor community.

If you happened to live in the southern hem and have some juicy stories to share with us – feel free to post.

The Slingsby T.38 Grasshopper is a British primary training glider built by Slingsby Sailplanes for the Royal Air Force

Development
The design is based on the pre-World War II German SG 38 Schulgleiter, modified to use the wing design of the Slingsby T.7 Kirby Cadet glider.[1] The design was cheap to manufacture and was designed to be stored dismantled. The type was used by Air Training Corps Squadrons between 1952 and the late 1980s.

The RAF designated the glider the Grasshopper TX.1 and the first order was for 65 aircraft which were delivered in 1952 and 1953. It was later followed by two further orders for an additional 50 aircraft, the final delivery was made in 1963.

Launch is achieved through the use of a V shaped bungee or elastic rope pulled by a team of helpers. The glider can also be mounted on a pivoting tripod pointed into wind for the demonstration of controls.

The Grasshopper is virtually identical to the EoN Eton.

The Siren C.30 Edelweiss (or C.30S) is a 15 m span, Standard Class sailplane designed in France in the early 1960s. The Edelweiss came second in its class at the 1963 World Gliding Championships (WGC) and first in its class two years later. Several are still flying

This GILF was sent in by my good friend and fellow gliderpilot in my club at Notodden in Norway. Here is his description and why this is one of his wet dreams still after decades of flying and numerous gliders in his logbook:
“My wet dream ? Well, having flown about anything which can glide through the athmosfere, ranging from Scheibe Bergfalke II/55, ASK 8b, K13, Pik3, “all kind of” SchemppHirths, and even Pik 20 and 18 meter aluminium Antonov A-15(!) , and now these days previliged to own my ASH31Mi, my secret wet dream is; Brace your horses….the french Sirên Edelweiss. Serious. Has been a dream since teenage ( secret nr 2; I am now 58..). Butterfly tail, just as my first own glider, the Standard Austria SH1, but much more slender, you more or less strap on the glider as you lay down flat on your back. Cockpit walls touching shoulders, you melt into and become part of her…. niizze, heh ? Beautiful lines, and said to be a delight to control, does not argue a bit on your inputs…. thats’s something! As my old late friend Harald Høymyhr once wrote in FlyNytt, a norwegian flying magazine; give me 30.000 shining norwegian kroner and I know what I would spend the at, just after having flown an Edelweiss back in late 60’es or possibly early -70’ties. (wow..30 K for a factory new top notch competition glider…those were the days..)
OK, GILFS, your draw……
Happy landings
Vidar
( by the way, I am chairman og Sandefjord Gliding club, we operate from Notodden in the mountainous part of Telemark, check Jarles startpage for a link to this may-be best norwegian gliding site for local as well as X/C flying. And our fleet should meet the expectations of most glider friends, wether you want relaxed local gliding, X/C or unlimited aerobatics. Strap on and visit us ladies and gent’s. Welcome!!)” Start
The first flight was conducted by Schempp-Hirths engineer Swen Lehner and the boss of the SOLO Engine factory Wolfgang Emmerich, in beautiful sunshine and temperatures nearing 30 degrees celcius in the shade. Thanks to the flaps of the Arcus, the aircraft took off after a short roll (approx 200m) and climbed quickly to altitude where the engine was switched off and retracted. The propeller is automatically stopped from spinning via a brake and brought into retract position via sensors without input from the pilot. the engine in flight is effortless by simply turning the ignition switch to ON. The new system controls all aspects of the engine ignition phase including extension/ignition and fuel. The amount of fuel mix ratio is controlled by the computer system and is adjusted according to altitude of the aircraft.

Flight Performance
The high wing loading of the Arcus is hardly noticeable, except in glide performance, and the large airbrakes allow for pinpoint accurate landings. The roll out is made much easier through the steerable tail wheel which is integrated in the rudder. 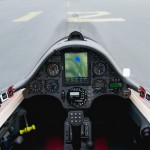 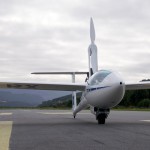 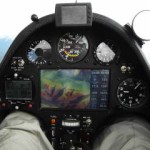 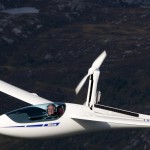 This thing just blow me away! Think about it, in Norway the wind in the summer is steady blowing from the south west. All I need is to find a property on top of a slope facing in to the wind and happiness for ever… Ok I´m a sucker for high performance and still have wet dreams about +55 L/D, but this thing – the archaeopteryx – what a perfect affair!